this journal is public

lemme know your usernames so I can add you

it's this thursday - saturday I believe (I should...make sure...) and I'm only going for the first two days but if there is anything you want me to check out while I'm there let me know

I have So Many Pictures for you guys but I am waiting until I get back from tokyo to upload them (read: I am lazy and keep forgetting but it is christmas break so I no longer have any excuse)

anyway today I visited the imperial palace gardens and they were REALLY PRETTY and I took a bunch of pictures but I can't show them to you because I seem to have misplaced my microSD adapter and I am not going to email them all to myself individually because that is tedious as fuck. if it doesn't turn up by sunday I'll go down to kyoto station and get another one sigh

regardless I feel like I should make an entry because it's been ages and I've only been able to check my f-list recently (what's new with you guys?)

but I don't really have anything to post about

so how about that eoa5

for the first time in a month and a half

and went to the study hall like normal only to find

parked there where I'd left it last night

RIGHT NEXT TO MY ACTUAL BIKE

BECAUSE MY KEY FIT INTO IT

WHAT THE ACTUAL FUCK WHAT ARE THE ODDS

so anyway I accidentally stole and returned a bike (and gave them an umbrella stand) should I tell the police...

also almost done with utena, someday I too will master the art of whipping my shirt open simply by turning around

anyway if you don't care about the above (understandable), here are some pics of my room for u 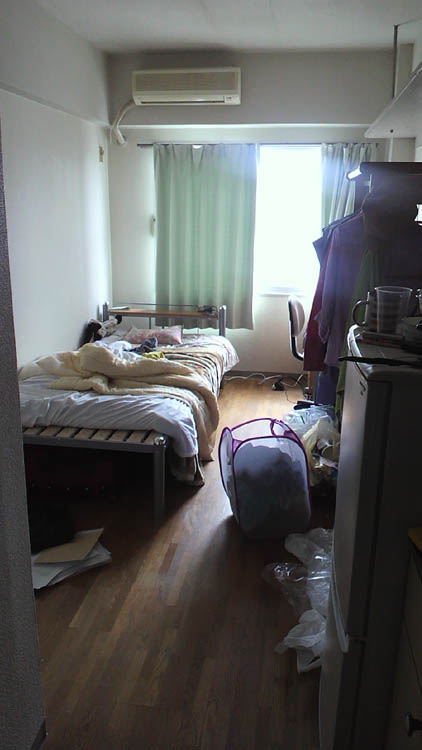 and I get to present on the ainu for my multiethnic and multicultural japan class yeah!!!!!

good news!!!! I finally figured out how to save pictures to my micro sd card! however I have not figured out how to move pictures I have already taken to my sd card, so I will not be able to share photos of the gion shrine with you unless I visit again, which is actually a likely prospect.

today I went to the kyoto international manga museum in an attempt to convince myself I am actually making an effort to go sightseeing and it was actually pretty underwhelming, though it had a few high points, such as the inclusion of antique bakery as an example of educational manga hahahahahaha

also the gift shop was selling some translated books, they had moyashimon and 20th century boys and I nearly peed my pants until I realized that they were like 2000 yen haha no

so yeah if anybody wants some weeaboo merchandise as souvenirs I can get some there, they also had dolls of the kyoto city mascot which is an anthropomorphized egg in a kimono(???)

thanks for all the cooking tips guys ♥

anyway, if you guys would be willing to give me some simple recipes I would greatly appreciate it... I tried making fried rice yesterday and it was kind of a disaster (though it was at least still edible)

I am able to fry and boil things but I am bereft of cooking common sense (I fucked up making a hard-boiled egg) so like...precise instructions would be most helpful